OUR STORIES: THELMA HOUSTON RESILIENCE & REINVENTION IN THE TIME OF COVID

Thelma Houston is not only a Grammy Award-winning artist, who has had #1 hits, toured the globe, and performed for royalty and presidents; she is one of the first stars to lend her voice in the first against AIDS in the eighties and is a long time Project Angel Food supporter. Ms. Houston’s current Virtually Yours concert is streaming through January 31 to connect fans through music during the pandemic with a portion of the $10 ticket benefiting Project Angel Food. As we celebrate the New Year to come, we thought we would catch up with the one and only Thelma Houston to reflect on her amazing career and to talk about her resilience as the Don’t Leave Me This Way diva reinvents herself in the age of COVID.

Project Angel Food:  You have performed concerts around the world, from the Grammy stage to the Golden Globes, to President Obama’s inauguration; how does it feel to be performing your first virtual concert?

Thelma Houston: I’ve just got to sing. When you are able to have a career last for a while, then you appreciate it, you appreciate the fans, and are so grateful to them and for all you have. So, when my platforms for performing were being canceled because of the pandemic, I was missing that opportunity to sing, to connect, to be there with the people who have given me a career.

So, when this idea for a virtual concert came up, I decided, let’s do it.  But, if I’m going to do it, this is how I want to do it and these are the songs I want to sing. Then it became fun. But, I’m not going to lie, it was a reach!

Project Angel Food:  I love that you are not afraid to reinvent yourself. What would you say has been the key to your success, to your longevity? You’ve been working in this business since the sixties.

Thelma Houston: I love giving. I love performing. And I have to figure out ways that I can do that. I’ve always tried new things. I am always looking for ways to grow and to try something new. I’ve always been driven not to be limited to one genre or be boxed in creatively. You know? I have to continue to find ways to be out there, to have a venue to do what it is that I  love. Sure, it’s a way to make a living. But it’s bigger than that; for me performing for others is something  I have to do for my very soul.

Project Angel Food: Don’t Leave Me That Way was a number one hit on all the charts and around the world, do you ever get tired of singing it?

Thelma Houston: Never!  The song was originally recorded by Harold Melvin and the Blue Notes, but Suzanne de Passe, who was head of A&R at Motown at the time, heard the song and thought it would be a hit if a female were singing it and it was done as a Disco song.

She called me and asked me to listen to it. Well, I was in Los Angeles and would go to Studio One or Catch and with our friends back in the day. So, I knew that the song was going to be one of those songs that people that the clubs would play, and then people would dance to it. But, I had no idea that it was going to be the hit that it was – wow.

Thelma Houston:  Our friends were dying, and we didn’t know why at first. I used to go out dancing, pretty much every Thursday. They were my friends, people I worked with, people close to me. So, I was in it, taking care of people, being with them so they didn’t have to be alone. And, when the opportunity came up that I could use my voice to create more awareness, to get people to listen a little bit more, I of course jumped in. I was already in and have stayed involved throughout the years because these are my people and we need to take care of one another.

Project Angel Food: Are you happy to welcome in a new year and say goodbye to 2020?

Thelma Houston: Yes. I think we should all be looking forward to the New Year with hope. You know, we’re going to have a new administration; we have a vaccine; we have a lot to be grateful for and a lot to look forward to as we get back to as close to normal as we can.

Ms. Houston’s Virtually Yours is streaming through January 31 and includes her greatest hits, songs from Motown, gospel, and all genres. Perhaps her favorite song in the special is Let It Be which she performs with a Cello.

To get tickets for Thelma Houston’s “Virtually Yours” click here:  http://www.thelmahouston.com 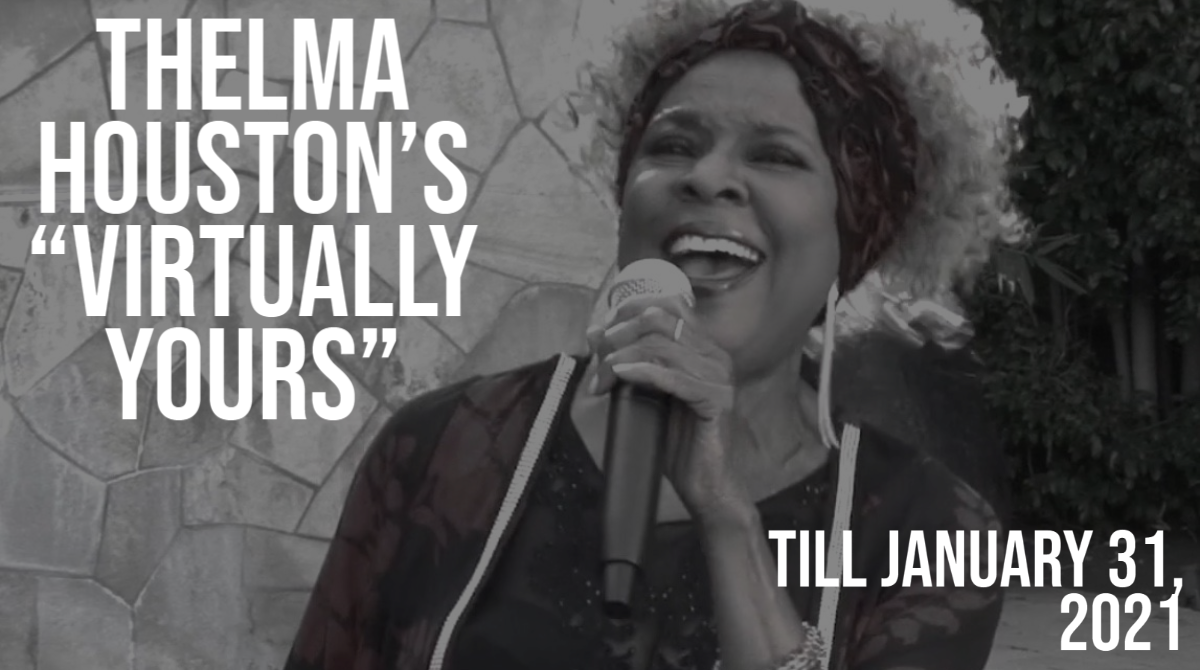